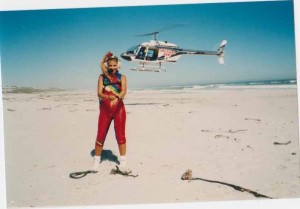 Melle on the Telly with her Heli....

A Gem of a Country

If you lived in South Africa in the late 80’s/Early 90’s, you would probably at some time or another been aware of a show on television in which one or another strange person in a jumpsuit jumped out of a helicopter and ran around the country shouting STOP THE CLOCK (or STOPPIE HORLOSIE, depending on who it was obviously!)

These were the days when there was no DSTV, eTv or Top tv, just good old Tannie SAUK, so what was probably the country’s first reality tv show, Skattejag/ Treasure Hunt became one of the top 5 programmes ever, with people finding out vicariously about this beautiful country of ours while we did ridiculous things to find treasures.

Yes, the improbably named Scot Scott (and yes, I do know his real name) and I became media darlings, and were instantly recognisable by a horde of people into whose homes we flew every Sunday evening (except for my husband – he was out of the country and has never seen any of my shows, so wasn’t aware of who I was or what I did, or he would probably have run screaming from the amount of testosterone that can be produced by a woman!!). And some 20-years later, nary a week goes by without someone coming up and asking, hey, aren’t you that chick from the chopper?

Now, the reason I’m going back in time is because at heart I have always been, and probably will always be, a Treasure Hunter. They gave me a job doing something I’d have done for free – and there’s the rub. Shows come to an end, and no more playing with helicopters. But the one thing that it gave me was an immense love of the country I live in – and really, nobody got to see it better, or find out more about it than I did…

And then some 6 years ago, I became aware of an almost ‘underground’ group of overland people who were on their own kind of Treasure hunts. I tried, in vain, to get the family involved, and not having a GPS, couldn’t go it alone… Until a few months ago when the man of the house saw a programme on a travel show in which the guys trekking through North Africa started geocaching…

What’s this? he asked.
Geocaching.
Do you know about it? A puzzled response
Yes, I tried to get you interested over the last 6 years.
So why haven’t we gotten into it?
Because you’re male. Men don’t listen.

Needless to say, since Him has discovered this, we’ve been out discovering more about our fair city, and when travelling, our beautiful country every available weekend. The children at first really weren’t keen when they realised that there’s no pot of gold at the end of every GPS rainbow, but once they got with the programme, they’re unstoppable, especially at finding those nanos! (although we have to admit some have only been discovered on the 3rd/4th/5th try…)

Within a 10km radius of where I’m sitting right now, there are about a hundred caches just waiting to be discovered. And you can do it too. Wherever in the world you are. Just need internet access to get the information and waypoints, which you can send to your GPS or a Smart Phone onto which you’ve downloaded the relevant caching programme, pen, camera and walking shoes and off you go. Fun for the whole family and an invaluable learning tool for the littlies. You don’t have to be as fit as the Skattejagters on telly used to be, or be able to swing from chandeliers. Most are easy to get to, and exciting to find!

So, if you ever had a desire to discovered hidden treasures, and give yourself a valuable experience to boot, take a walk off the reserve for a bit and go play. Just remember to tell me about it – you’ll find TheBlondeFH on geocache.com. Happy hunting!!!

I have always loved Johannesburg. I think that has come through rather … END_OF_DOCUMENT_TOKEN_TO_BE_REPLACED

It's that time of year when Joburg empties out, when most of the … END_OF_DOCUMENT_TOKEN_TO_BE_REPLACED

The more I listen to the radio, or read social media outpourings, honestly … END_OF_DOCUMENT_TOKEN_TO_BE_REPLACED